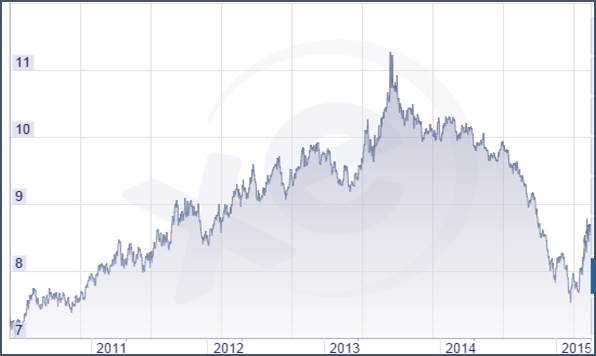 The graph illustrates the sharp volatility of the NOK/Rupee exchange rate during the last five years, to a current level of 1NOK=8,5 R (source www.xe.com)

It seems that India is all the rage today among global investors, including in Scandinavia. Though India’s economic and commercial ties with Norway are on the upswing, trade and investment flows are still modest. Despite rising exchanges, Norway has still a deficit of some NOK 1,5 billion. Around 100 Norwegian companies work in India, including Telenor, which enjoys rising revenues. Overall, Norwegian investments in India are estimated to around USD 10 billion, according to Embassy’s data. Capital flows keep flocking to India, a net winner from falling oil prices. Thanks to its reform-minded government’s pro-cyclical fiscal and monetary policy, portfolio and direct investors look positively at the 1,2 billion people country whose growth rate has reached 6% annually during the 2010-15 period. Foreign investment has paid a tribute to India to reach $30 billion this year, nearly a three-fold increase since 2010, while portfolio investment inflows are roughly the same size. As the IMF mission concluded in February of 2015: “India’s near-term growth outlook has improved, and the balance of risks is now more favorable, helped by increased political certainty, several positive policy actions, improved business confidence, and reduced external vulnerabilities”. Buoyant capital inflows in conjunction with the sharp current account deficit correction have increased international reserves to a comfortable level of US$320 billion, equivalent to about 6½ months of import coverage. The 25% external debt-to-GDP ratio confirms the country’s robust solvency.

Is all that enough to provide India with a sustainable development path, and investors with a convincing framework to increase exposure in India? Many risks challenge investors in India. First, stubborn inflation and exchange rate volatility will act as headwinds over the near-term, offsetting the improved external account thanks to lower oil import prices, shrinking gold imports, and rebounding exports. Inflation is a national tradition. India’s CPI still hovers around 5%, despite a tighter monetary policy. Second, structural imbalances restrain India’s long-term development potential, including a low level of revenue per capita, roughly $5000, and equivalent to only 43% of China’s score. Worse, India’s poverty level ratio of $1,25/day still affects one-third of the population. The wealth gap is one of the largest among developing countries; poverty is deeply rooted with strong regional imbalances. Average life expectancy is only 66 years, i.e., ten years less than the Chinese or 8 years less than the Brazilians. No wonder then that India’s index of human development is only n°145 among nearly 200 countries, worse than Honduras and Namibia, compared with 91 for China, 79 for Brazil, and 66 for Russia. In addition, the world’s largest democracy is also the most notorious bureaucracy, and fertile territory for sociopolitical unrest and ethnic violence. That’s why the brave investors must keep in mind that the “doing business conditions” in India, as analyzed by the World Bank, are worse than in Uzbekistan or Sierra Leone, ranking 142 among 189 countries.

Finally yet importantly, the main external risk facing India is a surge in financial market volatility, which could stem from the stronger dollar and the upcoming interest rate hike in the US. Rupee depreciation acts as an important shock absorber, though contributing to imported inflation, and wiping out the real value of dividends and capital outflows. Volatility, thus, is the name of the game in India. The SENSEX stock market index rose 27% last year, but only 1% year-to-date, a meager risk/return performance compared not only to Shanghai’s composite index but also to Eurozone members. The Rupee/NOK exchange rate has been a true roller coaster. Between 2010 and the summer of 2013, the Rupee depreciated 50%, before rising 30% against the NOK until the end of 2014. During the first five months of 2015, the Rupee depreciated against both the NOK, the Euro and the US$.

At the end of the day, targeting the best performing countries, those with good macroeconomic balances and socio-political resilience, requires flexible combination across assets classes and regions.